The Whistler Alpine Meadows race got my attention as soon as it popped up on my facebook feed as a brand new race to join the Coast Mountain Trail Series. As I’ve progressed with trail running, I have wanted to push the distance and difficulty. The longest trail race distance that I have taken part in so far is roughly 15km, and I’ve been interested in finding longer races. The 25km distance was a great opportunity for me to push the distance on this technical and mountainous terrain.

The race start and finish took place in an area called Alpine Meadows, just North of Whistler Village. The Start was at Riverside Campsite where I camped the night before, which worked out perfectly! The 25km route went up towards Rainbow Mountain on some trails that were constructed very recently and then traversed back down in a clockwise loop.

As I studied the elevation and distance chart,  I soon came to realize that this wasn’t going to be an easy 25km run! In fact, the kind of terrain I would have to tackle would require some hiking with around 1500m of elevation gain that included some fairly steep sections. 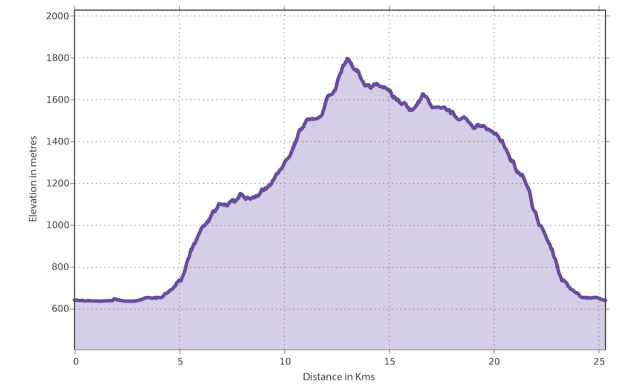 Life got in the way a bit over the summer, and I certainly wasn’t putting in the weekly training that I was accustomed to earlier in the year when I trained for the Victoria Half Ironman.  I did, however, manage to do a few harder hikes, including Hanes Valley and Wedgemount Lake that at least contributed to my climbing skills on steeper terrain.  I had been intending to do many weekends on the grind and local mountains to work on my climbing strength but my time slipped away.

I managed to get the odd long run in along the seawall and through the Stanley Park trails at a fairly low intensity. I knew I could tackle the distance, but I was certainly a little apprehensive about ‘racing.’

After questioning if I should do the race the week before, I decided to go ahead. I knew I wasn’t going to get a fantastic ‘time’, but it would be a great opportunity wasted if I didn’t take part and at least turn-up. I had my camping spot and car booked anyway!

Leading up to the event more information began to flow through my inbox about the event and details of the course. There was a lot of uncertainty regarding one aid station out of the two available that may or may not be there! It was dependent upon the weather conditions on the day, and if a helicopter drop-off could go ahead!

Due to the nature of the terrain and remote location, there was also a mandatory gear list that included a Bivy, torch, waterproof jacket and fire starting kit. As you may have read on my blog, I take safety on hikes and trail runs seriously and judging the weather conditions over the weeks I had already intended to take the majority of the requirements. 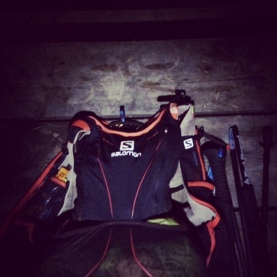 I drove up to Whistler from work and got my tent and gear set up. I was using my 12L Solomon pack and had all the mandatory gear plus some extra layers, gloves, hat, water and nutrition. After seeing the temperature and snow report, I was playing around with different layering options that wouldn’t be too cumbersome to carry.  I had one of my Black Diamond Carbon trail poles for the downhill sections and as a precaution for any snow or ice on the trail.

After a very uncomfortable sleep in the tent, I got myself up at 5 am and began to get myself ready. The race start was at 7 am just as the sun was rising. There was close to around 150 runners at the 25km distance. The 50km runners started 30 minutes before, and the 12km runners would go just after us.

Once I had my bib, listened to the pre-race briefing by Gary, I was on my way. I wasn’t looking for a time, and I made a promise to myself (which I kept) that I wouldn’t look at the time for the entire distance until I got to the finish line. I wanted to go by feel and finish it comfortably. With this in mind, I stuck to the back of the pack and took the first flat 4k very steady. As you can see by the elevation graph, it soon kicks up!

The next 5k of the route is fairly steep with some sections that were rolling that allowed me to catch my breath and have a short little run before hiking up again. The forest was very lush, vibrant and the trail was very soft underfoot. The thing that caught everyone by surprise was the wasps. There was a section of trail with multiple wasp nests in the ground and tree trunks that were aggravated by runners going past and began stinging everyone! It sure made us run faster and sounded like a horror movie with the screams!

The trail opened up to some stunning meadows and streams fed by a glacier further up the trail. It became quite rocky the closer we got to the glacier and certainly colder! 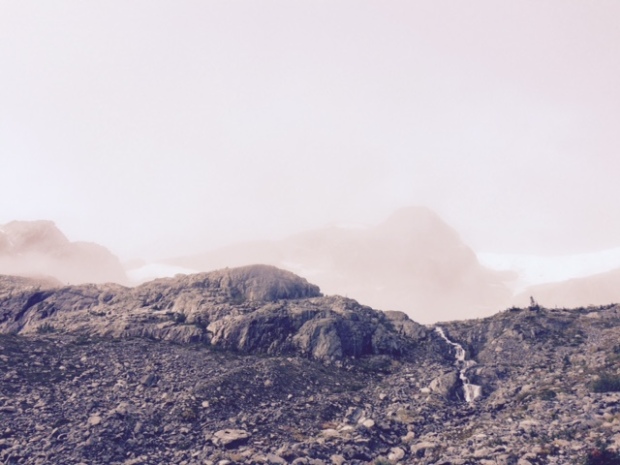 It was at this glacier we came to the second aid station with a spread of coke, chips, gels and watermelon.  This aid station was only possible from the heli-drop. 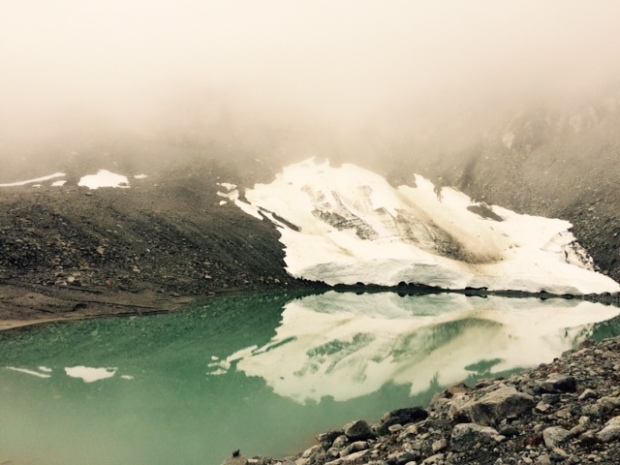 It was somewhat cloudy at the top so no views of the surrounding mountains or Whistler Valley.  A reason to come back on a clear sunny day!

There was one more uphill hike before the trail levelled out and began heading back down the mountain. For about 4km the trail was open meadows with mini streams, lakes, and patches of forest. It was quite beautiful and very fun to run amongst. The last section was the hardest for me. My knees aren’t a fan of steep downhill and soon found myself having to walk down sections using my pole to take some weight off.

I crossed the finish line in 5hrs 39min with a total distance of around 27km and over 2000m of vertical gain. I was pretty happy with the result! It was no easy race, but it opened my mind up to the challenges experienced and where to go next.  I would highly recommend this trail as a challenging hike during the summer months.  It won’t be long until snow covers this area!

Check out the link below for more info on these trails: