It’s just past midday on the 12th June 2016, and I’ve crossed the finish line at the Victoria half Ironman.   A comfortable 1.9km lake swim, 90km bike ride, with just over 800 meters of elevation gain and a 21km trail run. Yup, a friggin half marathon after all that cycling! This race was on my horizon for over eight months and would be a new benchmark and chapter to my racing.

The half Iron has raised the benchmark in my fitness, and the most visible signs were how I felt training, during and after the race. Physically it was a challenge but not to the point that I couldn’t handle it, I was pretty comfortable on the swim and bike portion. It was only once I had reached the halfway mark on the run that I started to hit a wall. If I asked the body I had four years ago to do the same race, I would have struggled. I went into the race to test myself, and I gave it what I had, with a little reserved so I could finish. Both my swim and bike were far faster than I had expected and that was a big deal for me. I had previously gone into the race wanting to get less than two hours on the run, but I did struggle, and I had burnt myself out too much to keep that goal.

I was over the moon with the finish time, but the biggest factor for me was how well my body had adapted to training and how fast I recovered. I knew all the hard work in training got me to this point, and I had conditioned it pretty well. I’m far from being a professional athlete, but I can certainly kick some ass now. 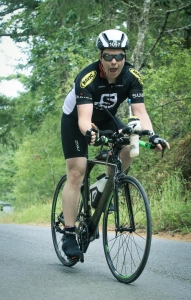 Leaping out of the water and seeing a swim time faster than my best at a shorter distance gave me a boost going into the cycle. I felt very comfortable on the bike from the start, and I carefully kept to a stable power output and aimed to average around 33km/hr. The course was beautiful, and I felt pretty alive especially zooming past people on bikes with $4000 wheels that are meant to make you go faster! It’s all in the legs! Finishing the bike in just over three hours meant I was way above my estimated time at this point, but a half marathon was still on the horizon.

I’ve run a few half marathons under 1:45 and I felt a lot of pressure on myself to go under two hours. As I was running, I started to make calculations on my finish time if I kept up the pace and began putting pressure on myself.   I was starting to burn out, which felt similar to the last 10km of my marathons. Every few meters became a struggle to keep running with different twinges and cramps in my legs and a real lack of energy. It was tough knowing I can go faster, and my favourite sport was the worst off in the race. I knew I couldn’t compare a typical half marathon to this race, but it still sucked.

The half Iron was such an amazing experience and has pushed my abilities to a new level, but it also cleared up my nagging thoughts about where I wanted to focus my time and efforts. As I got closer to the event, the training load was somewhat extreme with long hours spent each weekend on long bike rides or runs. The ups and downs of training started to affect me, and a lot of the time I just wanted to enjoy the sports without the pressure of the race. Long Distance triathlon is something that I may come back to in the future, but for now, I just want to focus on shorter distances and running.